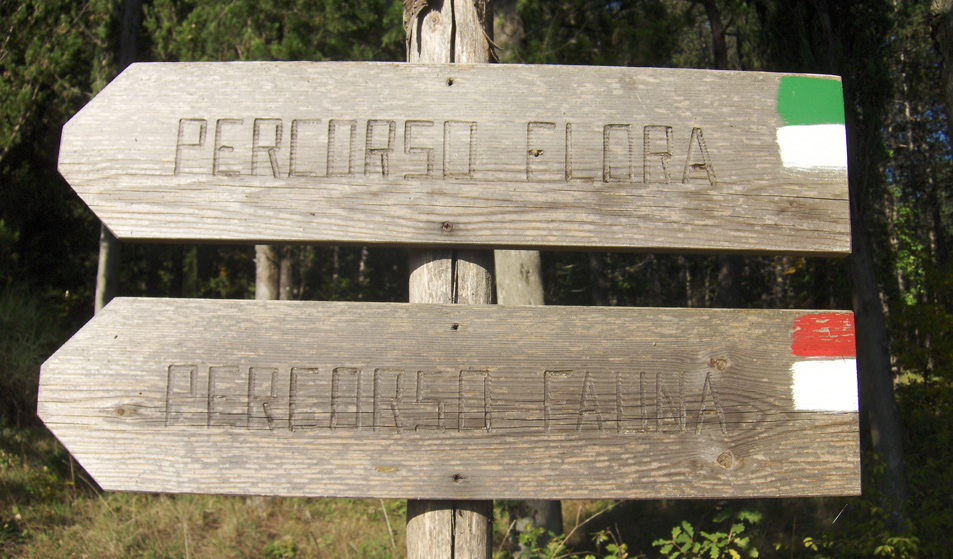 The trail is suitable for everyone and especially for families with children for the places visited, the shade of extensive pinewoods and the presence of the interesting Ornithological Museum. The trail is marked by blue-white signs. The departure point (602m) is outside the seat of the State Forestry Corps in Candeleto (C.F.S) that you reach by taking the county road SP201 along the river Carpinella in the direction of Pietralunga, turning left just before reaching the village. Then you follow the signs indicating the Ornithological Museum and C.F.S. Station, where it is possible to park.
You leave the museum on your right and take the gravel path, between conifer woods, running alongside the Candeleto campsite until you reach an intersection with a paved road, here you take the dirt path on your left inside the wood. Follow the red and white signs indicating the direction to Bocca Serriola.
The undergrowth is mostly covered with ferns. Once you reach a fork in the path, following the white-blue sign, keep left and you arrive at Monte Croce, between the pine forest and a colony of Oaks.
The top of Monte Croce (711 m), although occupied by a TV relay station, offers a panoramic view on the Carpina Valley. The nature trail continues parallel to gravel road, showing again the signpost for Bocca Serriola, until it changes direction when it begins to descend. After reaching a well signposted intersection in the trail, you turn left and enter a more mature forest until you reach the lowest point where you cross a ditch. Then the trail slightly takes you up again and in a few minutes it leads to the gravel road of Caipizzichelli that you take on the left.
At the height of a small fountain an educational trail begins. It is signposted with white an green signs , there small boards give the name of its trees.
After completing the Percorso Flora ( Flora Trail) you go back to a three road intersection from where you continue on the right walking past the former sawmill of the Mountain Community and past a stone building, until you are back at the departure point.