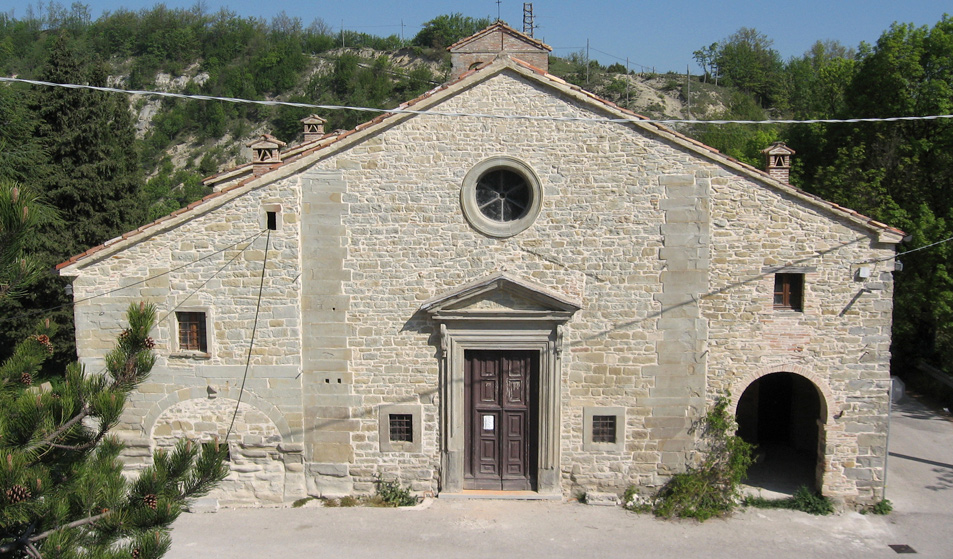 A trekking itinerary that winds through forests along ancient roads. You start from the houses at San Salvatore and go along the county road SP106, called Baucca in the direction of Città di Castello. Then, after 800 metres, you turn right and, after about one kilometre, you reach the departure point, the farmhouse “La Cerqua” (645 m). After parking the car, take the road that climbs, leaving the Farmhouse to the right.
After passing the first house you move on a ridge: on the horizon you can see Monte Nerone, recognizable by antennas on top of it and on the other side the Carpina Valley. You will walk past the ruins of an old house, near a water supply tank; here the road descends slightly and then immediately goes up. On the right you can see a fenced plantation of truffle-generation plants at Caiburroni.
After passing it and meeting a fork, take the path climbing on the left: soon on the right you will see San Felice, an unsafe small country church.
From the fork the itinerary continues along the path that opens to the left among downy oaks and junipers. As you ascend, the road stones underfoot become more regular until they form a beautiful paved road from the Roman period; once it connected the site of Forum Iulii Concupiense, in the Carpina Valley, to the consular Flaminia road. When the road surface becomes unpaved again you reach a crossroads, on the left just a little bit further up, you can see the tip of Mount Macinare, site of a pre-Roman fortified settlement.After passing a shrine, the road climbs in the shade of a thick pine forest. You are advised not to leave the main road, along which you climb up on the left to reach the very panoramic top of Monte Castellaccio (839 m), a name that indicates the location of the Castle once ruined and then disappeared from Castelfranco.
After retracing the main path, in a few steps you reach the main road for Apecchio with limited traffic. Keeping left, you gaze upon the newly born Carpina Valley. A few hundred metres further on there is the isolated hamlet of Castelfranco and nearby the 16th century Church dedicated to our Lady of Grace.
The route continues along a dirt road that leaves the Church on the right; the slope of Monte Castellaccio, so far hidden to your eyes, is now in full view revealing a thick beech forest; at the fork keep left along the headwaters of the Carpina river. The road verges on the Farm Pian del Pozzo and, further on, it joins another road coming from above; proceeding to the left, you cross the stream over a bridge. At this point you go past Cailuca and you turn left just before House Maccheroni, site of an old mill. Then you cross the stream again over a bridge and, once you reach the valley floor, you climb up on the other side.
At the next fork in the road, in the Colprejano place (609m), you turn right. Here there are remains of a Roman country villa with spas embedded in the ground: traces of mosaic floor and a travertine column trunk are still there.
Further on you reach the place where you left the car.