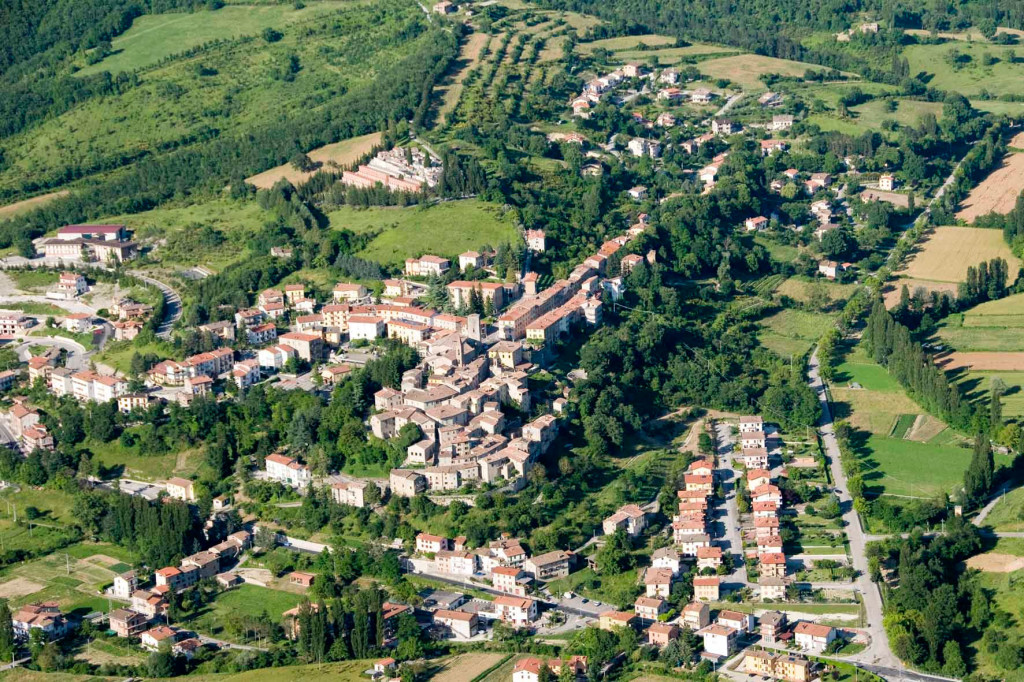 It starts from Pietralunga, more exactly from Piazza VII May, go along via Guglielmo Marconi to the crossroads where you turn right and then immediately left following the direction for Città di Castello. You continue along the county road SP 106 up to the intersection where you follow the direction “Zona Turistica Candeleto”. After a short uphill stretch you are in via dei Platani, turn right into via delle Querce. You continue to go uphill and after you pass by the pine forest of Coldefiore, as soon as the road begins to descend, at the crossroads, take the opposite dirt road that steeply climbs for about 1 km, until you get to the top of Monte Croce (735 m). In alternative you can take the path CAI 115 with direction Monte Croce.
Here the road becomes flat and winds along a scenic ridge, the view is breathtaking and you can admire the Carpina Valley on the right and the Carpinella on the left. Continue along the gravel road which corresponds to the path leading to the CAI trail 115 ending at Tre Ponti. At the second fork on the left you turn towards the farmhouse “Le Valcelle”; here the road begins to descend and after a few metres you can see the farmhouse on the right. Then you continue straight on and downhill until you reach the intersection with the county road SP 201. Here you turn left in the direction of Pietralunga and continue along the county road SP 201 until you take a road on the right, before a second bridge, showing the sign Sant’Anna. It is a paved road but full of potholes and quite challenging with a slope ranging from 15 to 22 % for about 1, 5 Km. At the fork turn left, then left again at the intersection with the county road SP 204, towards Pietralunga.
You continue along the county road SP 204 for about 2.8 km, as far as the junction with the county road SP 205. Along this stretch of paved road you can admire a splendid panorama on the right, framed by two peaks, Monte Nerone to the North and Monte Catria further East. At the crossroads, divided by the central “ pinetina” (small pinewood) that hosts the statue of Saint Ubaldo, you follow the signs for the farmhouse “San Benedetto”. After about 900 m you take the deviation to the left, an uphill path, where there are also signs for “Francesco’s Way” . Now you start an uphill path, with a maximum slope of 18%, but well worth taking since from here you can admire the village of Pietralunga from above. You are at about 700 m. a.s.l. After your hard climbing, you arrive at the farmhouse San Benedetto, here you continue straight on the dirt road along the walls (the farmhouse is on the left). You go downhill along the dirt path, at times bumpy; after 250 m you meet a gravel road at the border between Perugia and Gubbio, you continue to the left to reach the highest point of the itinerary (832 m), locally called Passo del Cardinale. After 2,3 km you arrive at Casa Renzini” and on the left side of a U-shaped turn you can see signs of the CAI indicating the place and the trail “ Gli Anelli del Lupo ( The Wolf’s Rings); more specifically the trail 120 A-“ l’Anello dei Monti del Vento” ( The Ring of the Wind Mountains”.
From here follow the red/white arrow signs, both directions are possible, both lead to Collelungo, that is at the intersection with the trail 120, known as the “ Anello di Varrea”. If you turn left towards Collelungo you can see the ruins of casa Renzini, going up an down in the State-owned pastureland. Pay attention to the small gates that can be found along the way and to the various ditches characterizing the rich vegetation of humid brackens. If you continue, for other 900 m, along the main road, towards “Passo del Cardinale”, the paved road ends and a dirt track begins, you will then leave it after a few metres to take a path which turns left at the edge of the pine forest. Pay attention to the signs. You can enjoy another panoramic view after the ups and downs along the sandstone path: Monte Nerone and Monte Catria to the left close a sequence of smaller mountains.
You continue downhill among rolling stones, and then going up again, along a path surrounded by state-owned milestones, on your right you meet a sequence of vast grasslands wedging into the woods. After crossing a barrier for grazing animals, keeping left you reach the already known fork of the “ Anello dle Lupo”. Here you turn left if you come from Casa Renzini or continue straight on if you come from “Passo del Cardinale” , however, you have to follow the direction Molino Chicchioni, immediately after the intersection you see what remains of the Casale di Collelungo then you enter a dense pine forest and continue descending in the shade of an oak grove. You will come to a series of buildings, that are part of “Molino Chicchioni”, once seat of the Hunting and Wildlife Company and, still earlier, seat of an old water mill. With the buildings on your left take the dirt road and after a few metres you are on the municipal road of Salceto Lame, you then turn left in the direction of Pietralunga. At the fork continue to follow the signs for the town centre and going along via Roma throughout its length you are back at the departure point.