RING TRAILS OF THE WOLF 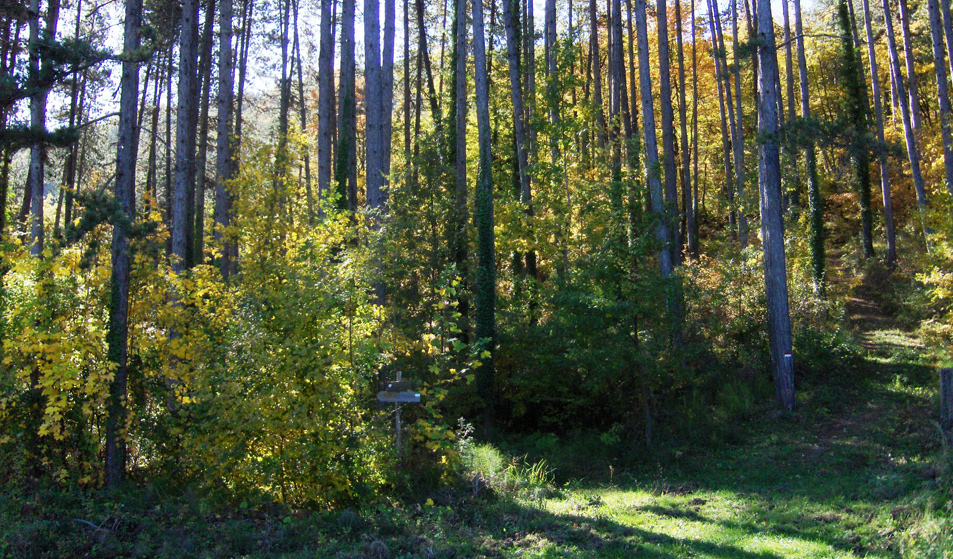 The proposed itinerary takes place in the woods of Pietralunga and consists of the paths 120 and 120A. From the main square of Pietralunga you drive along via Roma as far as the fork for Salceto Lame, here you turn left and driving along the Salceto Lame municipal road until the Km 0.5. You can park your car in a clearing on the right close to the fork for Molino Chicchioni (along the same road you can reach Collelungo by car, where the intersection point of the two rings is).
You start trekking along the gavel road leading to what was once a mill. There you take a path, on the left of the mill, that runs through the riparian forest bordering the waters of Fosso Chicchioni. Along the way you come to the first of many moveable gates. You continue slightly uphill in the shade of an oak grove, while proceeding, the oaks give way to black pine reforestations. At the end of the pine forest in a panoramic position (720 m) you can see the what remains of the House Collelungo, now used as a shelter for cattle.
After three hundred meters you reach the intersection with the other ring, named “ Monti del Vento”; here the trail descends slightly through woods in terraces, supported by dry stonewalls. Along the path that descends there are ditches, that create a vegetation characterized by humid brackens. In the lowest points at the intersection with small brooks, there are drinking troughs. While climbing up you meet the ruins of House Renzini, then after continuing uphill you meet a small gate, passing which, you come out of the state-owned pastureland. Then a wider paved road opens on the municipal border between Pietralunga and Gubbio and reaches the highest point of the Rings of the Wolf (832 m altitude), locally called Passo del Cardinale.
The way run is left to take a path turning on the left at the edge of the pine forest. Pay attention to the road signs. After ups and downs along a sandstone path you will enjoy another panoramic view:: Monte Nerone and Monte Catria on the left close a sequence of smaller mountains.
You continue downhill between rolling stones, and you go up again along a path bounded by State-owned milestones. After crossing the barrier to protect the grazing animals, in a short time the road takes you back towards the fork for Collelungo, keeping left you reach the known intersection which closes one of the rings. Here, following the precise road signs, you go towards San Pietro by taking a path that runs almost parallel but lower down to the previous one. You continue on the first ring, you had left only for a short time. You then see again the sequence of wood varieties noted previously. The trail intersects with a paved road, the opposite entrance is at 50 metres lower down; the path through the woods ends up with a dirt road that you take on the left downhill. At the next crossroads you keep right to avoid the paved road, soon after you turn right again. The deviation suggested enters a small grove and comes out at the height of the House la Tagliata, that offers a view on the beech woods of Mount Macinare and on the tip of Castellaccio (see Castelfranco itinerary). You arrive behind the isolated Church of San Pietro which opens on the hills with abundant cultivations. In the distance and in the haze you can see the row of mountains.
You continue between the Church and the only house existing there, to take the trail heading to the main road and verging the Cai Petrignani ruins on the right. After 500 metres of paved road to the left you are back to the car.